Hearings in Madison on Tue, Feb 14 and in Green Bay on Thr, Feb 16.
Written comments due March 3. 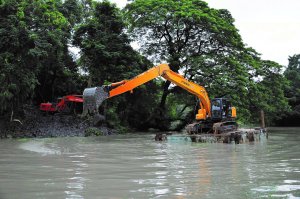 Considerable concern has been raised among lakefront property owners regarding the negative impact of the ease of obtaining authorization to dredge near the shore under a proposed general permit being considered by the Department of Natural Resources (DNR). General permits do not require the same level of scrutiny or notice as individual permits. Dredging is currently allowed in the areas this general permit covers, but only by obtaining an individual permit. Wisconsin Lakes’ position is that the individual permit process is not so onerous to need to be abandoned, especially given the potential harm that dredging can cause a lake when done poorly.

The permit would allow up to 25 cubic yards to be dredged from an inland lake over a five year period (100 cubic yards from the Great Lakes), but any amount dredged raises a concern.

Here are some of our principal objections to this permit:

If you choose to comment against this proposal, either at one of the hearings or in writing, we encourage you to personalize your comments by telling the department how a dredging issue could impact you in a negative way. Be concise, respectful, and on topic while firmly expressing your point of view will carry your message most effectively.

If you would like to get involved on this issue, here’s how:

DNR’s announcement and a link to the permit proposal can be found here.

The Department is holding two hearings thisweek to provide more information on the permit and to take comments from the public. The hearings are:

Written comments will also be accepted until March 3, 2017 by email to , or by standard mail to: